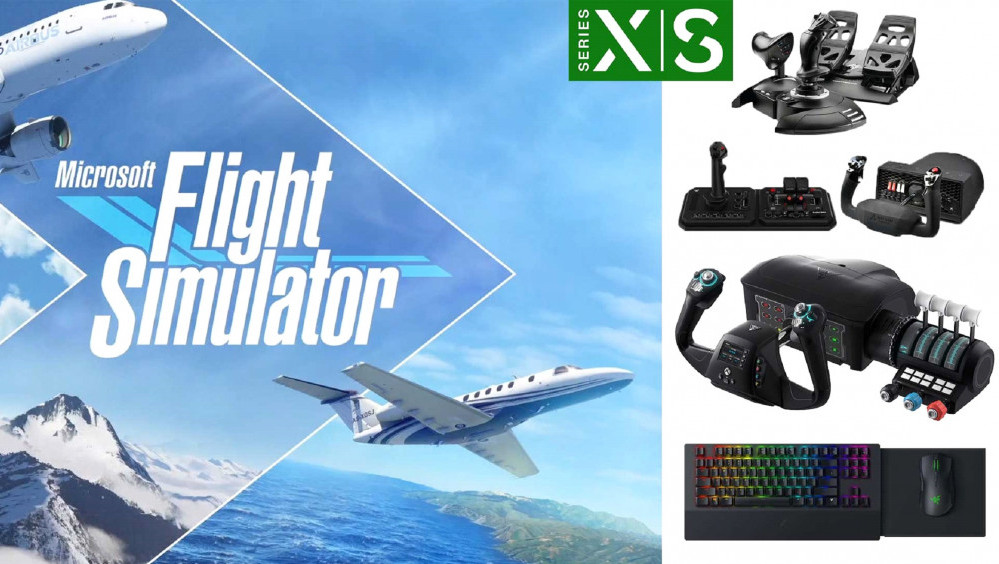 When the latest iteration of Microsoft’s Flight Simulator was released in 2020, it took the gaming industry by storm. The graphics and resulting realism astounded many, with some calling the AAA title the “greatest looking game ever.” A year later, the game is available on Microsoft’s latest Xbox systems (series X and S) thanks to a technical feat that can only be characterized as remarkable. To put things in perspective, the groundbreaking flight simulator is as demanding as any other AAA title, and it may easily overwhelm even the most powerful computers. As a result, bringing the entire scope of virtual aviation to consoles with limited power is no small feat.

**Please note: This post contain affiliate links. As an Amazon Associates I earn from qualifying purchases.

PC gamers will not like this, but before you throw stones at me for stating that, please listen to me out. I was first dubious about the utility of a normal Xbox controller in an aesthetically stunning flight simulator like MSFS. It would kill the realism and be analogous to using a keyboard and mouse on the PC version, I reasoned. However, after using it, I’ve realized that the controls make a lot of sense.

We’ve demonstrated that a conventional Xbox controller works quite well with MSFS, but why the Xbox Wireless Controller? For starters, it comes from Microsoft, a name that is linked with excellence. Second, it has a slick, streamlined black design that is both aesthetically beautiful and user-friendly. Most notably, it has twice the range of previous controllers, allowing you to fly long distances from the comfort of your couch.

Overall, the Thrustmaster Flight HOTAS One has certain flaws, but it is a steal at its price, making it one of the best Xbox controllers for Microsoft Flight Simulator 2020.

First and foremost, what exactly is a rudder pedal? In layman’s words, it’s a Microsoft Flight Simulator Xbox accessory that’s almost required for a genuine flight experience. Rudder pedals, on the more technical side, act like your car’s gas and brake pedals, allowing you to steer accurately. Rudder pedals are one of the must-have Xbox fight sim accessories if you want to recreate a cockpit.

It’s worth noting that the peripheral comes with a variety of connecting possibilities. You can use RJ12 connectivity to attach it to a USB port or a HOTAS. TFRP is compatible with all joysticks on the market in this regard.

Do you really need rubber pedals? If your joystick has a twist-action axis (which most do), the answer is no! That being said, it is essential for realism and a fantastic Flight Simulator addition to have.

The T.Flight Full Kit X combines Thrustmaster’s T-Flight HOTAS One with TFRP Pedals to create your own unique home cockpit. With the entire flight simulator bundle, you may fly in both light and large aircraft for an ultra-realistic flight experience.

The Full Flight Kit X will be available for purchase on October 19, 2021, although the two components can be purchased separately as early as today. There’s always a way when there’s a will!

Turtle Beach is a well-known name in the gaming headset sector, and with its Xbox Recon controller and Velocity One Flight Simulator, the company is seeking to expand into the controller market. While the former has earned positive reviews, the latter is set to hit theaters in Fall 2021.

The Velocity One Flight hardware from Turtle Beach combines Yoke, Throttle Quadrant, and Rudder Pedals into one unit. A 180-degree yoke and rudder pedals give convenient, precise, and long-lasting control, while the modular throttle quadrant with integrated trim wheel allows for realistic speed controls. When you add in the VelocityOne Flight Management Display and real-time warnings, you have a cockpit that rivals the best. “[Turtle Beach VelocityOne Flying] combines everything a beginner flier needs, coupled with the capabilities and features that dedicated flight simmers seek,” said Juergen Stark, CEO of Turtle Beach.

Overall, the Turtle Beach VelocityOne Flight provides uncanny functionality for the price, delivering an enhanced, immersive, and realistic flight experience in both light and heavy aircraft, making it one of, if not the finest, Xbox compatible peripherals for Microsoft Flight Simulator 2020.

We examined and ranked the best Yokes for Microsoft Flight Simulator’s PC edition only a few months ago, and Honeycomb Alpha Flight Simulator Yoke came out on top. The value proposition of Honeycomb’s flagship controller helps it exceed all other Yokes on the market. With that in mind, how would you react if I told you the best Yoke on the market was due for an upgrade? Alpha Flight Control XPC will be available in the first quarter of 2022 and will work on PC, Mac, and Xbox.

It’s worth noting that the Alpha Flight Controls XPC will keep the original Alpha Flight Yoke system at its core. It will have the same build quality, durability, 180-degree yoke returns with no center detent, a dozen programmable buttons, and a switch panel that is as comprehensive.

We just ranked Alpha Flight Yoke as the top Yoke for Microsoft Flight Simulator on PC a few months ago. We don’t see any reason to change that now that its revised Xbox compatible version is set to hit the market in the first quarter of 2022.

As I previously stated, the functionality and amount of immersion offered by each of these controllers varies. Not to mention the price difference: although some of these controllers are in the double digits, others might cost well over $300. All you have to do now is ask yourself two simple questions:

⦁ What is the maximum amount of money you are willing to spend on flight simulator hardware?

⦁ Which do you prefer: the Yoke or the Flight Stick? It’s worth noting that, unless you’re trying to recreate an airbus or a helicopter cockpit, Yoke is nearly always the way to go.

Your options will be severely constrained after you receive the answers to these questions. If you’re on a low budget, for example, it’s pointless to spend money on a premium controller when a regular Xbox controller will suffice. If you prefer a joystick over a yoke, Thrustmaster’s T-Flight Full Kit X is a great option. Combine it with Turtle Beach’s incredible Stealth 700 headsets for an ultra-realistic flight experience.